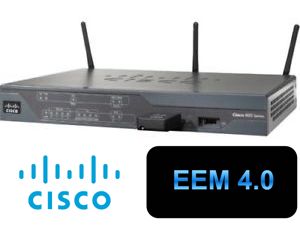 For quite a while I had issues with a faulty service module in a remote Cisco. Sometimes the card would lock-up and no longer respond and the only way to revive it was to issue the command service-module wlan-ap 0 reset to reboot it.

Normally one would simply replace it but that wasn’t that simple as the card itself can’t be replaced (and the device is also EOL) and the device is in a remote location without any technical staff on-site. Since rebooting the service module resolved the issue for that moment I looked for a way to automate that and documented that in this post.

END_OF_DOCUMENT_TOKEN_TO_BE_REPLACED

For some time I have been looking for a way to do simplistic performance monitoring without the need of two linux (virtual) machines to use the obvious solution iPerf. The iPerf solution is fine for normal situations but not very practical to quickly test a connection between routers as it requires 2 additional machines and configuring them correctly for the networks they should be in.

It turned out that Cisco’s IOS has a ‘hidden’ command ttcp for exactly this purpose. This command ‘hidden’ as it is not visible in the command help and will not and not present in all IOS versions. Cisco states that it is a hidden, unsupported, privileged mode command that requires IOS 11.2 or higher and Feature Sets IP Plus (is- images) or Service Provider (p- images. However, Cisco stresses that the command’s availability may vary from one Cisco IOS software release to another (i.e. it may not exist in some releases). Documentation of it is available on Cisco’s  Test TCP (TTCP) manual page (from 2005 so quite old).

Obviously the command works great between two Cisco’s (I could quite quickly measure the performance of my test DSL connection and it measured an expected 1.8Mbit throughput over the 2Mbit DSL connection. But how about a Cisco router and another system? After a little searching I found the nuttcp command, which according to its homepage is available for *nix systems but unfortunately the binary version of it does not install on Mac OS X. Fortunately the Debian Linux distribution has a package available so it was easy to get it installed on a Linux box (will look into an OS X version later when I really need it). In ‘legacy’ mode this command is working fine with Cisco’s implementation and running it is as easy as starting ttcp on the router and answering the prompts:

The last line is confirming that the router is waiting for a connection) and on the other end starting:

This runs the throughput test from the Linux client using the Cisco as a receiver.